So far we’ve introduced the next Equal Housing event in October and last month spoke with Karen Armitage about her journey and thoughts surrounding women progressing in Social Housing.

In this article, we speak with Sue Shirt, Executive Director at Stonewater about progressing and getting promoted in Housing. Sue is also appearing on the panel at the Equal Housing event: Females of the Future. 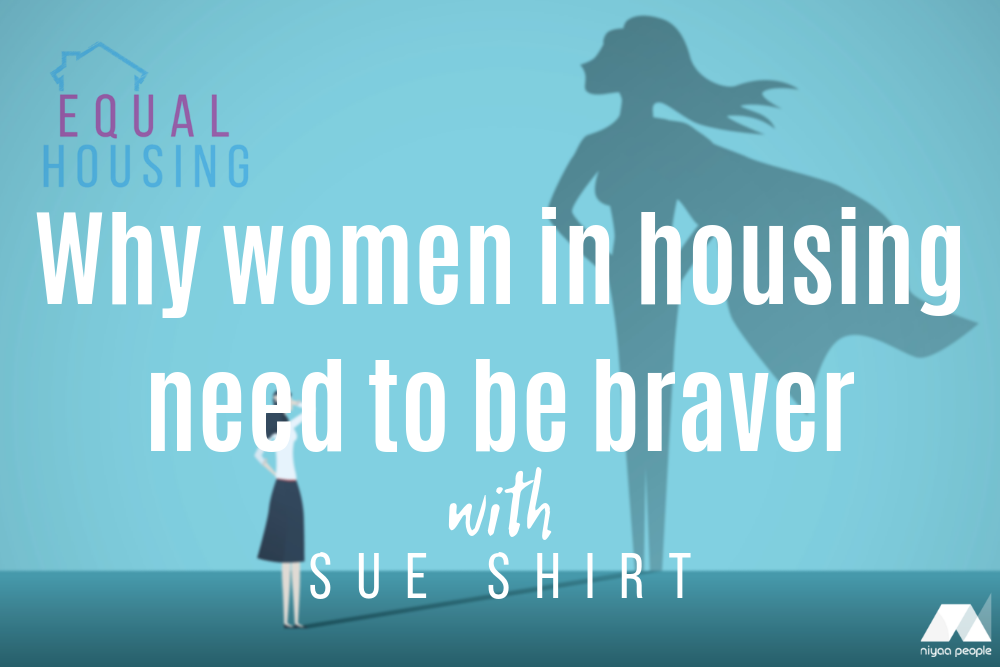 “What led you to a career in housing?”

SS said “I was studying for an economics degree, and volunteered to help run a children’s holiday project based on a council estate in Bradford. Whilst visiting parents to get their permission, I was drawn to how badly maintained the houses were, and how the area seemed to limit the aspirations of the people living there. When I graduated, I went to a job centre and said that I wanted a career in housing. I told them I wanted to do my institute of housing qualification, and ultimately to be a housing manager.

I started as a clerk to a Housing Officer, an entry level role and then worked my way up – choosing to work in difficult areas because they were most rewarding. This experience helped me learn the profession, and soon I moved into a management position.”

“What barriers or boundaries have you faced when progressing in your career?”

SS said “I’ve been lucky and have had some great role models, both male and female. I’d be lying to say there weren’t barriers, and early in my career there was behaviour that existed which was unacceptable. It’s not fully gone away, and there’s still more to be done, but we’ve definitely come a long way.

One of my principals has been to never be a grade hopper. Don’t apply for the money, apply because you think you’ll love it and do really well. Financial reward will follow.”

“What is your advice to the current generation of females who are starting off in Housing now who may face barriers in the future?”

SS said “You have to take responsibility for your own career. Find people you respect and learn as much as you can. Be willing to listen, and be brave. Go for the job you don’t necessarily think you can do – on average men have to be 70% sure they can do a job before applying; women say they have to be 90% sure. Be brave and go for the job!

I’d also really recommend coming to events like this – you’ll get to meet people who have faced many of the same challenges, and they’ll have some great advice and I know from experience that they’re happy to share it with you.”

“Organisations are releasing gender pay gap reports, do you think this is a contributing factor that there is gender inequality in leadership roles for Housing Associations in particular?”

SS said “I’m glad they are recording it and now we’re going to move on to pay gaps in terms of different ethnicities. Most organisations are already collecting that data, I think it is a can opener.

It’s really kick started the conversation around our sector, and within organisations. We need to give real thought to what the hidden barriers are, thinking about the way we use technology in areas such as recruitment and ensuring that it isn’t reinforcing unconscious bias.”

“34% of Housing CEO’s are female what are your thoughts on that?”

SS said “It’s good compared to the private sector, but it doesn’t reveal the full picture. Many women are also taking on childcare or looking after elderly relatives, and so it isn’t a level playing field.

There are some strong women across Housing Management, and events like this are a great time to discuss why there isn’t such strong representation in other areas of our sector. It’s also an opportunity to support women in the sector to be the best they can, through sharing our experiences and helping others to grow.”

“What do you think Stonewater are doing to encourage leadership and development now?”

SS said “Alongside our leadership programme, we’re working to improve our recruitment – focussing on competencies and attitude. We’re very flexible in our approach to working, not sticking to core hours and we offer remote working wherever we can. We’re an agile business, and our colleagues are able to work around their needs as well as those of the organisation. I have been lucky in that I have never missed a parent’s event, a sports day or an awards ceremony because of our flexible approach.

There’s more we can do, but in the meantime there is a clear commitment. Every business is stronger when there’s a broad range of people from different backgrounds working there. The best teams are those made up of a mix of genders, backgrounds and personalities, and the best management teams are no exception.”

© Niyaa People 2022— Building housing teams, one specialist at a time  | Built by huzzah!